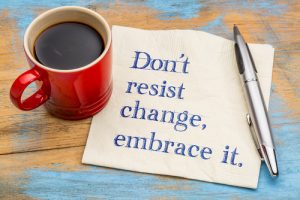 When is change the ingredient necessary to success? Do you have the guts to call for a change the way Nick Saban did in Monday night’s College Football Playoff National Championship? His quarterback, Jalen Hurts, who has been working for him for two years and amassed a record of 25 and 2 wasn’t producing in the first half and the team was lethargic. At halftime, Nick Saban made the kind of decision that leaders are paid to make. He decided to change quarterbacks and bring in the freshman Tua Tagovailoa. The end result? The Crimson Tide scored 26 points and won the college championship.

It’s not uncommon for any of us to do the same things over and over and expect different results. The question is when do we decide a change is necessary? Here are three things you can look at to help you identify when it’s time to make a change:

Do you accept change and will you implement it when it’s necessary? Many people do not. Change is difficult. Change means the unknown. Change may make you uncomfortable. Change often means pain.

As a Sales and Leadership expert, I have observed that most people avoid pain by avoiding change. But there are two types of pain in life: There’s the nuisance pain that comes when you’re trying something new and getting used to it, and then there’s the debilitating pain that comes at the end of a certain period of time or even at the end of your career when you realize you didn’t achieve everything you wanted to. That is a more lasting pain.

As you’re going through your daily routine as a sales executive or entrepreneur or leader, keep asking yourself this question: Are the things I’m doing working or is change necessary? And then ask: What is the change? Change for the sake of change is useless. Change based on research and preparation is what leads to good results. Of course, even making that kind of change involves risk, but the risk is what people get rewarded for. On Monday night, Nick Saban took the risk, and he and his team reaped the reward.

The Key to Success in Business and Life

The Key to Generating New Business and Growing Profitability

How to Write Fewer Proposals and Still Grow Your Business

Are You Having Trouble Visualizing Your Future?