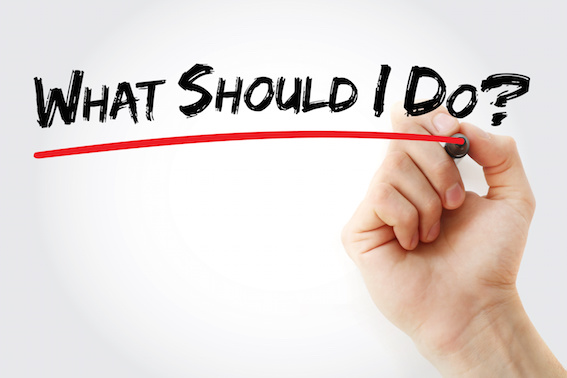 Last week I had the privilege to have Todd Davis, the founder and CEO of the publicly traded company LifeLock, speak at the Chief Revenue Officer (CRO) Mastermind dinner in Scottsdale. This is a group of CEOs from high-growth companies who get together with me three times a year for peer-to-peer mentoring and coaching on how to break through their roadblocks. Todd’s presentation came 30 days after he’d sold the company to Symantec for $2.2 billion.

As Todd shared his story, he kept returning to his guiding light in all of his decision-making processes. This became a theme for the rest of the CRO meeting, and I believe it is the key differentiator in what makes people successful. The differentiator is simple but not easy: Do what you should, not what you can!

As a sales and leadership expert, I have many opportunities to hear about issues people encounter with customers, employees, and vendors. I have noticed that when people are attempting to resolve problems, it often comes down to them trying to figure out who is right. But is that really the issue?  Such a narrow focus often leads people into the trap of trying to win the battle rather than the war.

One of the CEOs in my CRO group shared an issue with a key account. A customer was saying their product was defective, even though it was being produced according to spec. The issue is spread around three units, which in totality could cost them $100k to fix. If this was the only business on the line with that customer, then perhaps there might be a reason to argue with the customer to protect their bottom line. But this company was working on a groundbreaking relationship—moving away from a transactional relationship to a guaranteed volume of $3M per year. The perceived quality issues had put this initiative on hold.

When the other CEOs in the room heard the cost for fixing the problem was only $100k, they all said to bite the bullet, fix the problem, show the customer you stand behind your product, and make the buyer the hero. This would give him the strength to restart the negotiations and go after the $3M annual relationship.

Of course the vendor could argue that they are building to spec, but what is to be gained by such an argument? That could lead to winning the battle but losing the war. Trust is surely worth a $100K investment, especially when a potential $3M annual relationship is on the line.

Doing what you should, not what you can may cost you a bit in the near term, but done wisely, it will pay off in the long term. This same guiding light should be used with your employees to build morale and with your vendors in building reliable partners.

Are you doing what you SHOULD be doing in your business, or are you settling for what you CAN do? The answer to that question may make all the difference in improved relationships, increased sales, and greater profit.

How to Narrow Your Target Market

Do Your Tasks Support Your Purpose

How to sell to Millennials in 2023 and beyond