Home >Eliminate the Fear of Rejection

Eliminate the Fear of Rejection 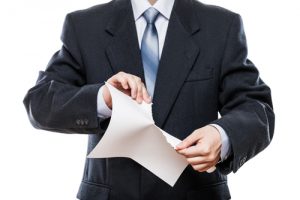 We rarely think about it or recognize it, but we all operate with something known as “normal strategies by default,” those ingrained strategies we have used all our lives to help us get to where we are today. As salespeople, some of those strategies are geared toward protecting us from rejection. Yet when those strategies remain unacknowledged and unexamined, they can prevent us from reaching the next of level of success we strive for. I learned this years ago from attending two communication courses taught by Landmark Education.

As luck would have it, I took the second course, Advanced Communications, one week before I had to meet with a client’s key decision makers as they were considering making my Titan Principle a part of their sales culture. This client had just completed a merger of two competing forces in the medical industry. The result was that two disparate forces were trying to unify under a common sales strategy and process. The stakes were high: $2 billion in annual revenues.

I met with the VP of sales and his four top lieutenants, and the agenda was for me to present my full capabilities in terms of sales training and consulting. I began by talking about value added sales, and the VP stopped and asked his team what the sales force would think if I talked about value added sales, and they all put their thumbs down. I then talked about key account selling and got the same response. Then I talked about consultative selling and got the same response. By this time I was flustered and fearful that I was about to lose a great opportunity.

If this had happened prior to taking the Advanced Communications course, I would have resorted to my old strategy by default and challenged the client by telling them why they needed what I was proposing. Now don’t get me wrong: We need to challenge our clients—but only after we know their real issues.  We shouldn’t do it because our fear is driving us to resist and rebel as a protective mechanism.

Instead, armed with what I had learned, I realized I needed to listen to the voices of the client. So I shut off my PowerPoint presentation, and said: “I’m confused. Can you help me?” I explained they had asked for this presentation yet they were rejecting it, and I asked what was going on.

That is when the VP taught me an invaluable lesson. He said, “Ron, I am as guilty as any VP who has hired you. We always bring speakers like you in yet rarely follow through on what you tell us to do. What we have here is a $2B organization where I need to combine two separate cultures into one. There is a book out there called The Titan Principle. I hear it is a good book and there is only one guy who wrote that book. I am looking to use the Titan Principle as the unifying force to make this merger successful. Even though you may talk about value added selling, if I promote it that way, we will lose the audience. But they haven’t been exposed to the Titan Principle on a deep level.”

Bingo! I finally understood what he was looking for. He wasn’t really buying sales training or management training. He was buying a new and unique sales process that he was going to use to create a united culture. This was an outcome he was willing to pay a lot of money for.

Since the VP was telling me how to sell him, I invited him to share how we should implement the program. He said I needed to go to Chicago and sell it to the management team. Then he taught me lesson # 2: Don’t do all the speaking. Give them a 20-minute module, and then have them discuss it in groups and share their findings. As a result, the two-day program was nothing more than four modules with the managers doing a lot of sharing. The incredible result was that they rated me as one of the best speakers they ever heard—and they did most of the talking!

Here are the three lessons I learned that helped reduce my fear of rejection:

Notice when your defenses start kicking in. When you do, you have probably identified one of your default strategies that is holding you back. As a Sales and Leadership expert, I want to remind you that no one has a 100 percent closing ratio. Just find the people that need what you have and concentrate on working with them.

How to Narrow Your Target Market

Do Your Tasks Support Your Purpose

How to sell to Millennials in 2023 and beyond